May 14, 2017
Jetstar Boeing 787-8 resumes Flights between Australia and Vietnam

Jetstar has resumed direct Flights between Australia and Vietnam for the first time in five years.  Flight JQ63, operated with Boeing 787-8 VH-VKH took off from Melbourne Tullamarine a little after 1545 on Wednesday bound for Ho Chi Minh City.  The Qantas-owned low-cost carrier (LCC) will operate three Flights a week from Melbourne and four Flights a week from Sydney to Ho Chi Minh City. 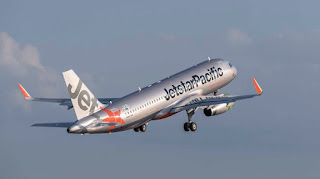 Jetstar last served Vietnam in 2012, when it ended narrowbody Flights on the Darwin-Ho Chi Minh City route. Previously, the LCC also had a short-lived Airbus A330-200 service from Australia’s east coast to Ho Chi Minh City.
Some festivities at Melbourne Airport ahead of Tuesday's Flight. (Melbourne Airport/Twitter)
Some festivities at Melbourne Airport ahead of Wednesday’s Flight. (Melbourne Airport/Twitter)
“There is enormous potential for Vietnam to become one of the most popular destinations for Australian travellers thanks to its wonderful year-round climate and great beaches, food and culture,” Jetstar Australia and New Zealand chief executive Dean Salter said in a statement on Wednesday. 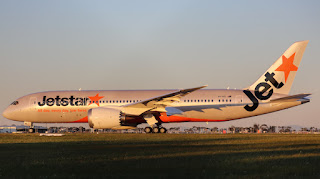 “We are already the biggest Australian carrier operating into Bali, Phuket and Hawaii – Vietnam is the next step in expanding our international network for budget conscious travellers.”    Jetstar, whose 787-8s are configured with 21 business and 314 economy class seats, joins Vietnam Airlines in offering nonstop Flights between Australia and Vietnam. The Vietnamese flag carrier and Skyteam alliance member has daily services to both Melbourne and Sydney from its Ho Chi Minh City hub in addition to three Flights a week linking Sydney and Hanoi.

Salter, who was on board Wednesday afternoon’s Flight from Melbourne said passengers could connect onwards to 15 domestic destinations in Vietnam on the Jetstar Pacific network.

Have a Promotional Coupon?